Word from the Minister of State 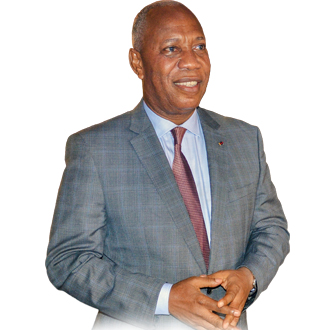 Minister of State of Civil Service, Labor and Social Security

As you know, since August 22, 2017, by order of the President of the Republic, a contract binds me to you, within the framework of the public service that we are called to offer to our fellow citizens, in our capacity as clerk of the State.

I would like to take this opportunity to identify some directions, the variations of which are as follows:

Regarding point number one, I place and I will always place the exercise of the heavy responsibility that the President of the Republic has kindly entrusted to me under the following sign:

My loyal allies would be: competence; professional conscience; moral probity; love of work and a high sense of public service.

Regarding point number two, I would be careful not to expect it. Because, more than anyone, you are supposed to know our missions.

More than anyone else, you have, perfectly, what the President of the Republic expects from us: to ensure the implementation of the "March towards development" in the sectors of the civil service, state reform, government. labor and social security.

More than anyone else, you are supposed to have at heart the pressing expectations of our fellow citizens related to the sectors we are responsible for: constantly improving the way in which the State's human resources are managed; ensure good social protection for the populations; to put in place a quality public administration capable of meeting the demands of our time; promote labor legislation compatible with the imperatives of development and employee protection.

In the performance of these missions, no visual navigation is permitted. We will face all these challenges on the basis of an action program which provides for the continuation of the projects undertaken with determination, control and efficiency, by my valiant predecessors. Our program of actions also includes new requirements. We will invest in particular in:

In order to achieve the implementation of this road map, beyond economic conditionalities, there are prerequisites which depend on us, in our capacity as fighters on the social front. It is these prerequisites, once taken into account in our way of serving, that open the doors to success for us.

This is where my third orientation comes in. It refers, in fact, to the endless question of People.

To this end, I would like to stress that exercising public service is fulfilling a noble and exhilarating duty, that of serving the public, of listening to users, of satisfying their fellow citizens.

And the one whose mission is to serve the public must never turn his back on this same public. On the contrary, he must receive the public with kindness and benevolence. He must anticipate his expectations.

Public service implies compliance with the laws and regulations governing the public sector of administration, including those dealing with:

Repeatedly denounced by the Head of State, anti-values ​​and other deviant behavior must be combated with the utmost energy.

At a time when the state is experiencing serious difficulties in meeting social demand, bad manners of serving in the administration, prohibited practices in public administrations, especially the one for which we are responsible, should be banned. To do otherwise would be tantamount to wanting to worsen the difficulties of our fellow citizens. They only ask for one thing: to be well served and, above all, better served.